The 265th New York State Militia was a small unit of the New York line and could trace its lineage to the War of 1812. The new regiment was given the designation, 14th regiment, which is one of the oldest military organizations in the United States because of its direct lineage through various separate companies, to the militia companies of the Dutch burghers of New Amsterdam.[2]

In Sketches of America (1818) British author Henry Bradshaw Fearon, who visited the young United States on a fact-finding mission to inform Britons considering emigration, described New York military service as he found it in New York City in August 1817:

Every male inhabitant can be called out, from the age of 18 to 45, on actual military duty. During a state of peace, there are seven musters annually: the fine for non-attendance is, each time, five dollars. Commanding officers have discretionary power to receive substitutes. An instance of their easiness to be pleased was related to me by Mr. —, a tradesman of this city. He never attends the muster, but, to avoid the fine, sends some of his men, who answer to his name; the same man is not invariably his deputy on parade: in this, Mr. — suits his own convenience; sometimes the collecting clerk, sometimes one of the brewers, at others a drayman: and to finish this military pantomime, a firelock is often dispensed with, for the more convenient wartime weapon—a cudgel. Courts-martial have the power of mitigating the fine, on the assignment of a satisfactory cause of absence, and in cases of poverty. Upon legal exemptions I cannot convey certain information. During a period of three months in the late war, martial law existed, and no substitutes were received. Aliens were not called out.[3] 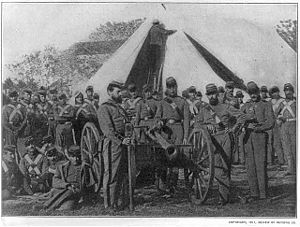 Many units of the New York State Militia saw service in the American Civil War, after being activated into federal service by President Abraham Lincoln.

The activation of state militia by President Abraham Lincoln led to some conflict with State authorities in command of the units:

With the advent of the Civil War in April 1861, the 14th regiment saw its first war service in guarding the Brooklyn Navy Yard. By mid-April of that year, the "Brooklyn Chasseurs" were ready to leave New York for Washington D.C. Colonel Alfred Wood advised the Honorable Governor Morgan that the regiment was prepared to march and had accepted a three-year federal enlistment. However, the governor would not issue orders for the regiment to leave New York. While encamped at Fort Greene Park in Brooklyn, Colonel Wood and Congressman Moses O'Dell went to see President Lincoln to secure orders for the regiment to march to Washington. President Lincoln lost no time in issuing those orders to the 14th Brooklyn. When Governor Morgan learned that the regiment was preparing to march, he telegraphed Colonel Wood and inquired "by what authority" did he move his regiment, Colonel Wood coolly replied, "By the authority of the President of the United States."[4]

Following the Civil War, efforts were made to link the varied military units in New York under overall headquarters. As a result of this, the 3rd Brigade, New York State Militia, came into being on August 5, 1886.[5]

On August 3, 1917, the Adjutant General of New York, in order to comply with the provisions of the State Constitution requiring that troops be available to the Governor for the protection of life and property of the citizens of New York, organized a state military force known as the New York Guard. The new force replaced the New York National Guard, drafted in the service of the United States on August 5, 1917. The force consisted of the First and Second Provisional Regiments, guarding aqueducts and other infrastructure in the southern portion (First Provisional Regiment) and the remaining parts of the state.

On January 1, 1919, the Guard numbered 22,000 in active service. After the Armistice, federalized New York National Guard Units were returned to State control.

On May 21, 1924, Babe Ruth joined the New York National Guard and was Assigned to the 104th Field Artillery in Jamaica Queens Armory.

George Herman Ruth, popularly known as "The Babe", "The Bambino", and "The Sultan of Swat", was a member of the 104th Field Artillery in Jamaica Queens. On May 21, 1924* he signed the dotted line for three years and joined the ranks of civilian soldiers.

Babe Ruth was sworn in by Colonel James Austin at the Isle of Safety in Times Square in front of a military tent used for enlistment drives. Once the enlistment papers were filled he symbolically placed them into the open jaws of a horse drawn French 75-millimeter gun. He was then immediately placed under the command of First Sergeant Adrian Jacques who was in charge of the regiment present. He served while he played in the stadium he was destined to rebuild. A May 29 Washington Post article reported that he appeared before General John Joseph Pershing at State, War and Navy building in Washington** once he was fitted and squared away.

The 104th Field Artillery underwent several changes over the years while in active duty. The unit served briefly under Federal control on November 5, 1916 for Mexican border control, then returned to state status on November 15, 1916. In addition, the unit was activated for Federal service during World War I and II. It wasn't until 1917 that the unit received its destination as the 104th Field Artillery and saw extensive service in France.

With the advent of World War II, New York National Guard units were federalized and the New York Guard was created for service to the State.[8]

In the wake of the September 11, 2001, terrorist attacks, the New York Guard provided security, disaster relief, legal, communications and other services to New York City and the surrounding areas in cooperation with the National Guard. During this period, Major General John F. Bahrenburg was Commander of the New York Guard (his tenure as Commander was from 1999 to 2002).[9]

The New York Guard experienced a resurgence after the September 11, 2001 attacks. New York Guard units were activated after the attacks, performing a variety of missions, including, logistical support to forces stationed at "Ground Zero". Medical units of the Guard worked in conjunction with other DMNA forces providing care at several location including Camp Smith, in Westchester county.

Members of the New York Guard load supplies onto a flatbed as a part of the State Active Duty mission in the Fall of 2017 Hurricane Maria deployment.

Principal occupational specialties of the New York Guard include, communications, engineering, medical and legal services, provided in support of all components of New York State military forces, i.e., the Army and Air National Guards, Naval Militia and the New York Guard, as well as to civil authorities.

Trained and state-certified New York Guard soldiers augment and assist National Guard units in the following missions: weapons of mass destruction [WMD] decontamination – the joint New York Army National Guard / New York Air National Guard / New York Guard decontamination, or CERF, team was activated by the governor for state duty for 11 days during the 2004 Republican National Convention in New York City, Military Emergency Radio Network – the Guard is assigned to operate the MERN at various locations to ensure the free flow of information during an emergency, and search and rescue (SAR) a secondary mission to the state. New York Guard SAR teams have been mobilized, for example, in the summer of 2006 to search for a missing camper in the Adirondack Mountains preserve. Selected units and personnel of the New York Guard were called to State Active Duty with pay in response to Hurricane Irene in 2011.

2012 saw the largest deployment of the New York Guard since the September 11, 2001 attacks. Every brigade was at least partially activated for service during 'Superstorm' Sandy. New York Guard members served as equals alongside the Army National Guard, Air National Guard, and New York Naval Militia, at one point making up approximately one third of all troops in the field during a two-month deployment.

In addition to its SAR work as a secondary mission under the New York State Defense Emergency Act and Article 2-B of State and Local, Natural and Man-Made disasters Act, engineer units of the NY Guard 10th and 65th Brigades have built facilities for the National Guard.

Civil affairs units provide legal services to about-to-deploy troops such as wills and counseling on legal protections under federal and state law.

The New York Guard augments the capabilities of the National Guard, serving only within New York State. Guard personnel are drawn from almost every profession – from plumbers to professors, clerks and CEOs, persons with long prior military service and those without, and every part of the state.

The headquarters unit of the New York Guard is located at Camp Smith, Cortlandt Manor, New York. Camp Smith is a New York State military reservation. It is adjacent to Peekskill, New York, and about 35 miles north of New York City.